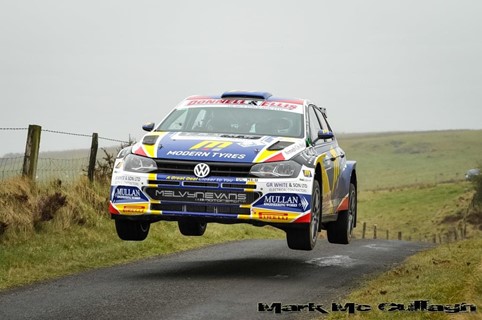 The Circuit of Ireland name returned to the Irish Tarmac Rally Championship last month for the first time since 2016. Traditionally held over Easter, the Ulster Automobile Club’s very compact 2022 event was based in Ballymena and held over 11 classic closed road stages in the Glens of Antrim.

The two-day rally, sponsored by Wastewater Solutions, started on Good Friday with three runs over Orra Lodge (10.10 miles) and Lisles Hill (9.33 miles). Then on Saturday these stages were reversed. Cairncastle (14.05 miles) was used three times and Glendun (9.70 miles) twice. Disappointingly only 75 competitors started the event with 52 making it to the finish.

Surprisingly the rally was NOT a counting round of the 2022 Northern Ireland Rally Championship. Nor indeed was the Circuit a part of the British Rally Championship, all Irish events having been dumped out of that series this year.

Number one seeds Alastair Fisher and co-driver Gordon Noble won the event in their Volkswagen Polo GTI R5. Josh Moffett and Andy Hayes (No.2) were second in a Hyundai i20 R5 while Callum Devine and Shane Byrne finished third 41.9 seconds back in car No.3, a VW Polo GTI R5. At least the top three seedings were correct!

Northern Ireland Championship leaders Jonny Greer/Darragh Mullen were fourth in the Citroen C3 Rally2. Top 2-wheel-drive and National category finishers were the Donegal/Mayo crew of Daniel McKenna and Andrew Grennan. They were fifth overall in their Ford Escort Mk.2. Derek McGarrity/Graham Henderson out for the first time in a VW Polo, were sixth. In fact six of the top 10 starters were in Polo GTI R5’s, apparently now the car to have for Irish tarmac events.

Desi Henry in his Fiesta Rally2 had taken the rally lead from the start on Friday. Then Callum Devine from Claudy, also out for the first time in a Polo R5, took over for two stages until Kilrea’s Henry hit back and then held the lead until his Fiesta engine expired at the finish of SS9 on Saturday morning. Other leading retirements included the Polos of Meirion Evans, Declan Boyle and Brendan Cumiskey plus the Skoda Fabia R5 driven by Cathan McCourt.

Josh Moffett, who until now hadn’t been beaten in both the Irish Tarmac and Irish National Rally Championships this year, was leading Alastair Fisher by just 2 tenths of a second heading for the final stage, SS11 the 14.1 miles of Cairncastle. Fisher, who had been fourth after Friday’s six stages, was now on top form. He was fastest on the previous three Saturday tests. The Ballinamallard driver then put in a storming drive over that final stage. He beat Moffett by 11.4 seconds to set the fastest stage time and consequently take the rally victory, 11.6 seconds ahead of the Monaghan man.

The Fisher name was back on the famous Circuit of Ireland trophy for the first time since Alastair’s uncle Bertie took the last of his three victories back in 1999. The last time a Volkswagen won the Circuit was in 1959 when Kevin Sherry claimed victory in a VW Beetle. Of course it was a very different event way back then! This year’s winning co-driver, Omagh man Gordon Noble, was Clerk of the Course back in 2011 and then again in 2012 when the Circuit of Ireland became a round of the Intercontinental Rally Challenge.

BMMC (NI) were out in force on the Circuit of Ireland. The club provided officials, rescue crews, timekeepers, radio operators, recovery, refuel and stage marshals. It was a very long event for those who volunteered for all three days (the service park opened on Thursday)  Stage marshals were on duty for 12 hours plus on a wet and misty Friday and then again on Saturday which was a bit better weather wise.

For my contribution to the rally, Victor joined me to cover start radio on Glendun. We were joined by Rory, Goff, David and Nigel on our rescue unit while Craig was on mid-point rescue and John and Anna were covering timing and radio at the stage finish. The stage was delayed by 30 minutes on both runs but we had no other problems at all and were stood down by 4pm. Luckily for us, after early morning fog it turned out to be dry and sunny for the rest of the day. 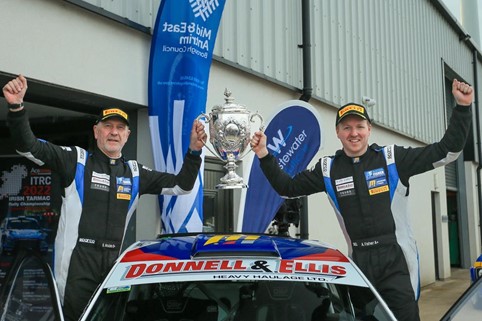 The 1982 Circuit of Ireland was won by Jimmy McRae in his Rothmans Opel Ascona 400. This was his first hat-trick of wins. The rally ran without an overall sponsor although the Europa Hotel Belfast, HQ for the event, sponsored the NI stages. 97 cars started from Ormeau Park on Good Friday and went straight into a spectator stage. Hannu Mikkola  in the Audi Quattro was fastest here in the damp conditions; I was timing on the finish line. As soon as the competitors hit the proper stages McRae took charge and was only headed once throughout the rest of the five-day rally. The longest stage was Sally Gap at 19.75 miles. 44 crews made it to the Belfast City Hall finish on Tuesday with Russell Brookes second in the Vauxhall Chevette HSR and Henri Toivonen third in the second Rothmans Opel Ascona 400.

The late Frank Meagher was the surprise winner of the 1992 Circuit of Ireland in his Ford Sierra Cosworth. The rally started and finished in Newcastle Co.Down. No sponsor yet again for the four-day rally, but the UAC put on a tough event which claimed most of the fancied runners. Fisher, McHale and McKinstry in their Japanese “supercars” all fell by the wayside and were gone by the time the rally reached the Newcastle finish on Easter Tuesday. Megaher won by SEVEN MINUTES from David Greer in a similar car while Derek Smith was third in his Escort Mk.2.

Trevor Moore won the Vodka Kick Tour of the Sperrins in his Escort Cosworth. Eugene Donnelly was second in the ex. Robin Phillips Toyota Celica and Stevie Whitford third in his Mitsubishi Evo.6. We were timekeeping on SS1 Glenshane Forest which was shortened due to persistent heavy rain. The first gravel event in the 2002 Northern Ireland Rally Ireland was organised by Magherafelt and District Motor Club. 96 cars started and 64 finished.

The 2012 Donnelly Group Circuit of Ireland was dominated by the works Skoda Fabia S2000 team who finished 1-2-3. Juno Hanninen/Mikko Markkula won the rally while Andreas Mikkelsen and Ola Floene were second and Jan Kopecky/Pavel Dresler third. Run over two days at Easter, the event was the third round of the Intercontinental Rally Challenge. Starting and finishing in Belfast all 15 stages were in Northern Ireland. In total there were 106 starters, 35 in the IRC section and 71 in the National Rally section which was a round of both the Irish Tarmac and the Northern Ireland Rally Championship.

As Chief Timekeeper I had 67 timekeepers manning all the various controls on Good Friday and on Saturday plus the shakedown stage on the Thursday. The rally was a major success and there were no issues with regard to timekeeping. We were using a new electronic system on the stages which gave lots of problems but we overcame that.

BMMC members will be out in force once again. We are covering rescue, recovery, radio, timing and stage marshalling. Surprisingly, Jonny Greer’s name does not appear on the entry list. The 2021 Champion and current Championship leader is concentrating on the ITRC for the rest of the year. Greer’s main rivals for the NI title, Derek McGarrity, Aaron McLaughlin and Joe McGonigle have all entered. Sign-on for the Claudy Stages Rally will be done electronically on rallyscore.net

Round 4 of the Northern Ireland Rally Championship. Organised by Cookstown Motor Club and sponsored by MJE Wheel Repair Specialists. The closed-road event is scheduled to take place over three short smooth tarmac stages run three times. Based in Stewartstown Co.Tyrone. We are covering rescue, radio and timekeeping plus other duties on this one. Sign-on will be on paper at the venue on the day as things return to normal practice.

It’s been three years now since the last Donegal International. That event was halted early due to the tragic accident which cost the life of Manus Kelly. For 2022 the rally is celebrating its 50th anniversary. Round 5 of the Irish Tarmac Championship, a maximum entry of 150 cars will start from Letterkenny. Friday sees three repeated stages in the Inishowen area while Saturday’s 8 stages will include the famous Knockalla test. Then on Sunday, the classic Atlantic Drive will be run twice plus two other repeated stages. We will be involved with timekeeping and other duties. More details next month.

Rallying as a discipline was given the green light earlier this month, and now Motorsport UK has created a guidance video to help everyone understand the changes we have to undertake. Here is a link to the video:-    ReturnToTheStages

Latest updates from Motorsport UK, the wider motorsport community and the latest from the UK Government..

The latest information can be found here.