The Northern Ireland Rally Championship resumed last month with the Maiden City MC’s Eakin Bros. Brian James Trailers Stages Rally. Rally HQ and the service park were based near Claudy, Co.Derry. Two closed-road tests close to Donemana and Artigarvan in West Tyrone were run three times giving a total of 39.96 stage miles. Round 3 of the tarmac series had received a full entry of 100 cars of which there were 94 starters and 71 finishers.

Victor and myself were on start radio for SS1/3/5 known as Altishane. The BMMC/BRMC NI rescue unit (crewed by Rory and Goff) was also covering these stages. All three tests ran smoothly and in dry conditions, apart from a heavy shower at the start of a slightly delayed SS3 which caught out some of the leading crews.

Desi Henry and Paddy Robinson won the rally on the final test. The Ford Fiesta Rally2 crew, having led early on, were overtaken on stage four by the Citroen C3 of Cathan McCourt/Liam Moynihan. Henry then clinched the win by just 2.3 seconds when McCourt had an overshoot on the last test.

Garry Jennings in his Fiesta R5 was a very late entry as he and Rory Kennedy prepared for the Donegal International later this month. The Kesh/Letterkenny pairing finished third overall. Joe McGonigle was fourth in his Fiesta Rally2 but as he was the first registered NI Championship runner to finish he scored the maximum 30 points. Alan Carmichael finished fifth in his Hyuandai i20 R5 while top 2WD finisher was Damien Tourish in sixth place with his Escort Mk.2. Aaron McLaughlin took eighth in a Fiesta R5.

Championship leader Jonny Greer was a last-minute entry, but he crashed out of second place on SS3 when his Citroen C3 Rally2 clipped a bridge 2 miles into the 7.05 mile stage. Two top Donegal drivers setting up their VW Polo R5’s for their home event had bad luck. Declan Boyle and Donagh Kelly both retired with mechanical problems early on.

Derek McGarrity who finished the Maiden City event in seventh place with his VW Polo R5 now leads the championship on 83 points from Aaron McLaughlin on 80 and Joe McGonigle with 79. Derek’s young son Michael is fourth on 71 while Jonny Greer drops back to fifth with 61 points. It’s great to see such a level playing field in this year’s NI Championship with almost everyone now in R5/Rally2 cars. There are two more rounds to come, both on closed-roads. The Tyrone Stages this month and then the Down Rally in July. May the best crew win! It couldn’t be closer! 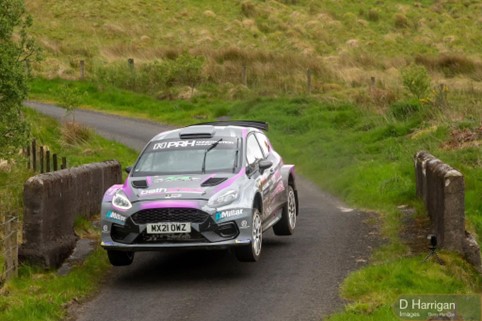 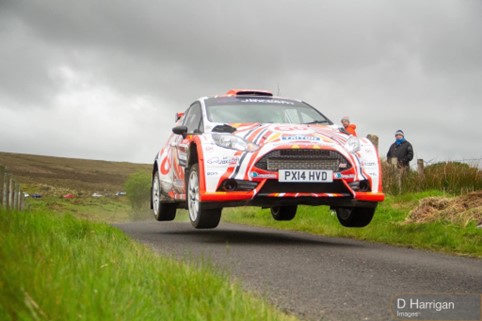 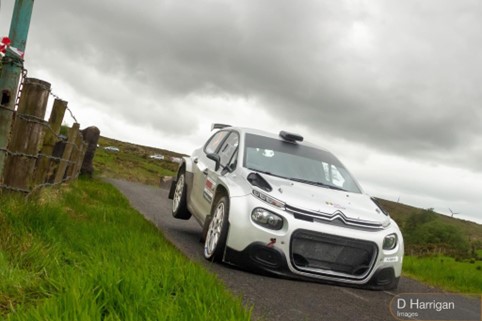 Turning to the 2022 World Rally Championship: Huge congratulations to Northern Ireland driver Josh McErlean who (like Desi Henry) is from Kilrea in Co.Derry and his Co.Cavan co-driver James Fulton. The pair were the surprise winners of SS16 on the recent Rally Portugal in their Hyundai i20 Rally2 car. The short Super Special Stage around the streets of Porto, which was the final stage on Saturday (day two of the three day event) was streaming wet for the first Rally1 supercars, but once the cobbled streets had dried out, the following Rally2 cars were able to set faster times. McErlean was running well down the field after problems on the days earlier rough gravel stages. The young Kilrea driver took full advantage of the drying conditions to beat everyone, including the eventual rally-winning Toyotas of Kalle Rovenpera and second placed Elfyn Evans. Josh McErlean was classified 40th at the end of the rally on Sunday. There were 56 starters and 50 finishers. Not great numbers for a WRC event!

Rovenpera is the man-of-the-moment having won the last three WRC events. The 21-year-old is now 46 points ahead of his nearest challenger Thierry Neuville after four of the thirteen rallies in the 2022 Championship.

Round 4 of the Northern Ireland Rally Championship. Organised by Cookstown MC and sponsored by MJE Wheel Repair Specialists. Three short closed-road stages near Rally HQ in Stewartstown, Co.Tyrone will be run three times giving a total of 45 stage miles. We are covering timekeeping, radio and rescue on this Mid Ulster event. All the leading NI Championship contenders are in the 100 strong entry list which is headed by Claudy Stages winner Desi Henry. Interestingly the MacHale brothers Gareth and Aaron make a return to the stages in a pair of VW Polo R5’s

Round 5 of the Irish Tarmac Championship. The 50th anniversary of the above event. Donegal MC have planned a total of 20 closed-road stages over the three days. These included all the classics; Knockalla, Fanad Head, High Glen and Atlantic Drive. We are timekeeping on Saturday and Sunday. Except a full entry of 160 in the main event cars plus historics and juniors. Can Alastair Fisher win the event so beloved by his late uncle Bertie who won the rally four times? Calum Devine, Josh Moffett, Desi Henry and company may have other ideas about that! The 50th Donegal International Rally should be a cracker!

Last year this event was a round of the NI Rally Championship. Now that things have returned to normal following COVID-19 restrictions, the single venue rally reverts to clubman status. Organised by North Armagh Motor Club. We supply radio operators and stage marshals for the popular sealed-surface rally.

The 5th and final round of the 2022 Northern Ireland Rally Championship. Organised jointly by Rathfriland & Ballynahinch and District Motor Clubs. Rally HQ and service park is based at the Eikon Exhibition Centre at Balmoral Park near Lisburn. We are providing a rescue crew, radio operators, timekeepers and other marshals for this closed-road stage rally. Stages will include the classic Hamiltons Folly.

Rallying as a discipline was given the green light earlier this month, and now Motorsport UK has created a guidance video to help everyone understand the changes we have to undertake. Here is a link to the video:-    ReturnToTheStages

Latest updates from Motorsport UK, the wider motorsport community and the latest from the UK Government..

The latest information can be found here.